Currently I am using docker containers to deploy applications. A number of those containers make use of supervisord for managing processes. While supervisord itself comes with a UI, it is unhandy for me because each container is its own supervisord instance.

So I was interested in some software that would let me manage multiple supervisord instances in a single page. Turns out that there are several tools lsted here. Unfortunately none of these worked for me.

So with the power of open source I rolled my own. I based mine on supervisorui. Unfortunately, supervisorui hasn't been updated in 10 years. What is worse it depends on a Silex library that doesn't seem to exist anymore.

So I ripped out a bunch of complex functionality and recreated it as supervisorui-redone. 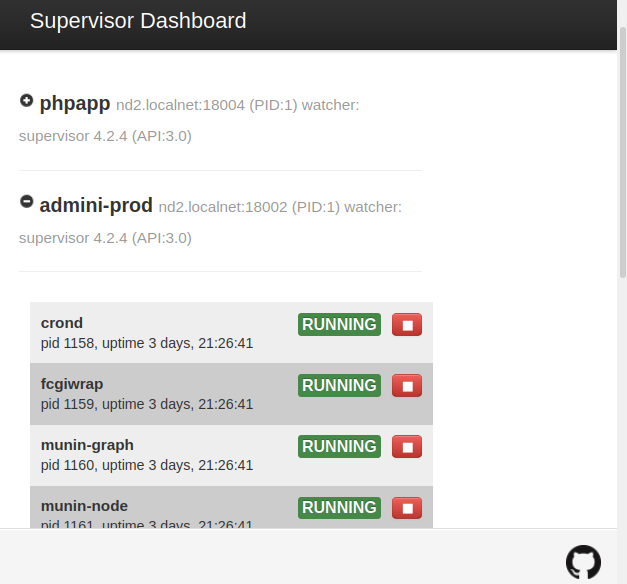 It is indeed a quick and dirty implementation, unlike the original supervisorui that has heavier JavaScript dependencies. supervisorui is mostly a JavaScript applications and simply uses php for backend access to the supervisord. I assume that it would make it more interactive.

My re-worked version is basically a PHP application.

As such, I removed the dependancies on

Also fixed Incutio XML-RPC Library so that it works with PHP8.